“They’re actually not that tall” is what you will often hear from people retelling run in with said “famous” person at the airport or hotel lobby. For some unknown reason it’s human nature to be curious about how tall famous people actually are in real life because often like everything else on the big screen Hollywood deceives us with how tall people actually are. Did you know that Tim Robbins is in actual fact taller than Michael Richards (Kramer in Seinfeld)? Wait it gets crazier. Tim Robbins is the exact same height as Michael Clarke Duncan (The Green Mile) at 6ft5! This got us thinking – who the 10 tallest movie stars ever are?

There were of course people we wanted to include like Hodor, Treebeard & Big Hero 6 but unfortunately they were either not tall enough to make the cut or not played by actual humans, thanks to CGI. Everyone in this list is over a staggering 7ft (213cm) and just to put things in perspective, they are all in fact taller than Carel Struycken (7ft) from the Adam’s Family Movie who we were sure would make this list! Coming in at number 10 is recently deceased actor Richard Kiel (died age 74 in late 2014). Originally a bouncer and cemetery plot salesman, he landed his first role as a character called Bare Knuckles in the NBC series Klondike, however his breakthrough film came in the 1974 along side Burt Reynolds in the original The Longest Yard film. It wasn’t until 1977 when he played infamous badass “Jaws” in the James Bond film The Spy Who Loved Me that Richard really shot to fame. He reprised the role in 1979’s Moonraker “I had convinced the producer that Jaws should have some characteristics that were human to counteract the steel teeth. I guess I overdid it — I became too likable to kill off!”  – he said in 2009. To do this remaining one of the most memorable and formidable 007 foes. Richard would then go on to become famous amongst a whole new generation of film goers as his highly quotable role as Mr Larson in the 1997 cult classic Happy Gilmore starring Adam Sandler. Former NBA basketball giant Wilt “The Stilt” holds many basketball records still to this day, his most famous one being the only player ever to score 100 points in a single game – you have probably seen the famous photo of him holding up a sign with the numbers “100” on it that later would become the basis for the ever popular “100 emoji”. Wilt was the first in a long line of basketball stars to take the plunge on to the silver screen. Wilt played himself in a number of TV shows initially and had quite the following of fans of the opposite sex who were curious about his proportions, this was probably due to the fact that in his biography (A View From Above) he claimed to have slept with over 20,000 women! Wilt only ever starred in one film, however when your only film is starring alongside Arnold Schwarzenegger as the club-swinging Bombaata in the 1984 sequel to Conan the Barbarian – Conan the Destroyer. Widely regarded as the most dominant big man to ever play in the NBA, over the years Shaq has definitely not been afraid to put his name to a number of products and endeavours including; ‘Mr Big’ candy bar, Shaq-soda, Shaq-Fu the rapper and most notably Shaq the actor. Shaq’s (off-court) acting career all began in 1994 when he played (you guessed it) a basketballer named Neon. This led to a myriad of small roles through out the 1990’s for Shaq, most notably Kazaam & Steel. However it is probably his cameo appearances in comedies where Shaq has being the most memorable including his roles in such classics as Freddy Got Fingered, Curb Your Enthusiasm and the hysterical Saw parody scene in Scary Movie 4 “Kobe?!”. 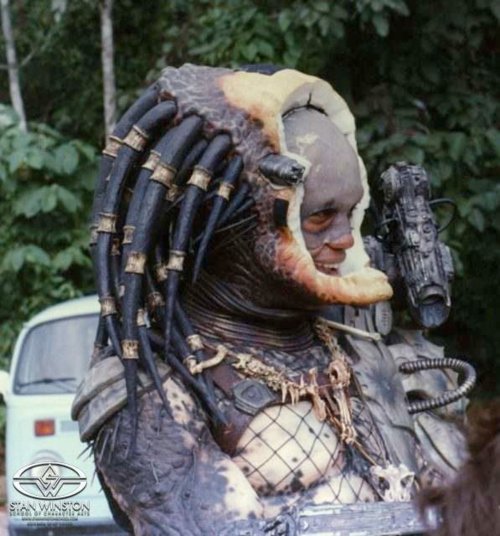 Although you may not be familiar with the name Kevin Peter Hall you will definitely be familiar with the movies he stars in. Spending most of his film career behind a mask or as “grunt roles” as he referred to them, Kevins breakout role was, like a few others on this list – going toe to toe against Arnie in the original Predator movie. He would later go on to reprise his role as The Predator in Predator 2 with Danny Glover. Clearly having a knack for playing large latex monsters, Kevin played Bigfoot in Harry and the Hendersons. His career was cut short when died in 1991 from aids at just age 35. Trivia: He can also be seen without a mask in Predator as he plays the helicopter pilot at the end of the movie as well. 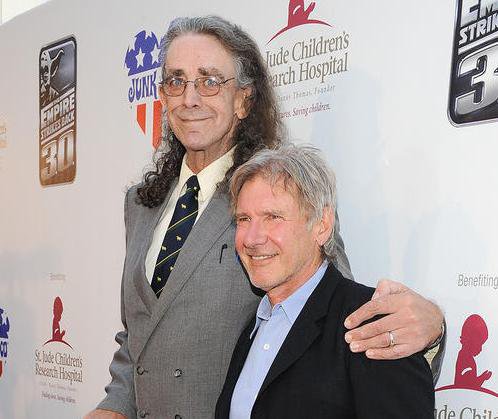 If you’re wondering who that is towering over Harrison Ford, it’s Peter Mayhew better known as Han Solo’s sidekick Chewbacca in the Star Wars franchise.

Peter was famously offered to choose between the role of Chewbacca and Darth Vader and ultimately decided to play Chewbacca because he wanted to play the role of a hero. He studied animal movement at the Zoo to prepare for his role as Chewbacca and although he has not really had any other memorable film roles he did receive a life time achievement award for his Chewbacca portrayal and a big enough sci-fi fan base that he can quite easily spend the rest of his years touring comic conventions.

Kareem “the dream” Abdul-Jabbar best known as former LA Laker, is the third ex-NBA player on the list. Along with being the NBA all-time leading scorer, Kareem also has an impressive film resume, with over 20 film/TV roles to date including a role in Stephen King’s mini-series The Stand. However most notable are his cameo roles in comedic classics such as Baseketball, Mighty Ducks 2 and of course the 1980 Zucker bros comedy Airplane!

Although you may not be familiar with the name or even the movies John Aasen starred in, the legend and story surrounding him is well worth the read. Born in 1890 and one of the first successful tall actors in the early days of cinema, there were a lot of reports circulating of just how tall he was. Some reported John to be as tall as 8’11” whilst others had him as 7′. To settle the score in 2008 a measurement was conducted by Guinness Book of Records on his skeleton which came in at 7’2″. John was most well known for his role as Colosso in the 1923 comedy Why Worry. Born Andre Roussimoff in France. Andre would go on to become one of the most famous WWF wrestlers to date. Andre The Giant as he was known had many famous run ins with Hulk Hogan in the 1980s and it was only a matter of time before his larger than life personality transcended wrestling and in to the entertainment industry. His first breakout role on screen was as Bigfoot in the televison show The Six Million Dollar Man and his most famous role was that of the lovable giant in the 1987 The Princess Bride based on the children’s fantasy classic of the same name. Unknowingly Andre would also go on to become the basis of the infamous ‘Obey’ street art symbol and later clothing brand. Move over Ian Thorpe, Matthew McGrory is listed in the Guinness World Records as having the largest shoe size at a whopping 29½. It was this that lead to his appearances on Oprah and essentially put his name on the map whilst he was still a bouncer in West Chester and friends with Bam Margera and the Viva La Bam crew. Mcgrory has appeared in many famous acts music videos such as Blondie, Marilyn Manson and Iron Maiden. This was probably what landed him his first breakout role in the cult horror House of 1000 Corpses by Rob Zombie. He later went on to play Karl the Giant in the Tim Burton classic 2003 fantasy movie Big Fish. Unfortunately like several others on this list Mcgrory’s career was cut short when he passed away at only age 32 in 2005. Guinness Book of Records still has Mcgrory listed as the tallest actor of all time.

Muresan is another former NBA basketballer who started his career dominating European professional basketball. Originally from Romania, Muresan made his way over to the NBA in the Michael Jordan era of the 1990s where he won most improved player in 1995-96 however due to injuries his NBA career was cut short and he turned to acting. Muresan can be seen in Eminem’s famous music video “My Name Is” and also got a starring role alongside Billy Crystal in the 1998 comedy My Giant earning him the number one spot on our list of the top 10 tallest actors of all time.